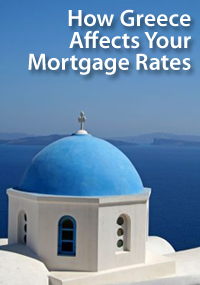 Home affordability is receiving a boost from across the Atlantic Ocean this spring.

For the third time in as many years, a weakening Eurozone is pushing May mortgage rates to new lows throughout North Carolina and nationwide.

The story centers in Greece and begins in 2010.

2 years ago, it was uncovered that successive Greece governments had purposefully misreported the nation-state’s economic statistics in order to meet European Union standards. The fraudulent data had permitted Greek governments to spend beyond their means while hiding deficits from EU auditors.

The realization that Greece was heavy in debt with little means to repay its creditors resulted in a massive bailout from the IMF and the rest of the Eurozone nations. The terms for Greece said that, in order to receive its €110 billion aid package, Greece would be required to enact strict spending controls.

This is known as “austerity” and the deal was met with outrage by the Greek public. There’s been general social unrest ever since and, on May 6 of this year, Greece held a special “early election” to elect all 300 members to its legislature.

No party won majority in the elections.

7 different groups garnered seats in the parliament last week with anti-austerity groups faring well. It’s spurred concern that Greece will end its bid for fiscal restraint, and that Greece may choose to leave the 17-nation Eurozone.

The uncertainty surrounding Greece is helping U.S. mortgage rates to make new lows. As concerns mount for the future of Greece — and the Eurozone, in general — global investors seek safer markets for their money.

The U.S. mortgage-backed bond market is one such market.

With the implied backing of the U.S. government, mortgage-backed bonds are viewed as nearly risk-less and investors clamor for safety of principal during uncertain times. The boost in demand drives bond prices up and bond yields down, resulting in lower mortgage rates for home buyers and refinancing households of Greensboro.

So long as Greece struggles to form its government and flirts with a sovereign debt default, mortgage rates should continue to face downward pressure. U.S. rates may not fall week after week, but analysts expect any rise in rates to be muted.

Home Buyer Guide - Winter 2021 Are You Thinking About Buying a Home? The process of buying a home can be overwhelming at times, but you don’t need to go through it alone. You may be wondering … END_OF_DOCUMENT_TOKEN_TO_BE_REPLACED

The housing market has gone through a lot of change recently, and much of that was a result of how quickly mortgage rates rose last year. … END_OF_DOCUMENT_TOKEN_TO_BE_REPLACED

If you’re a homeowner ready to make a move, you may be thinking about using your current house as a short-term rental property instead of selling it. A short-term rental (STR) is typically offered as … END_OF_DOCUMENT_TOKEN_TO_BE_REPLACED