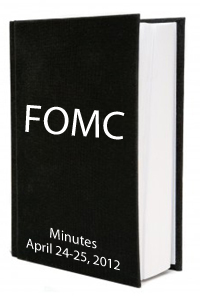 The Federal Open Market Committee released its April 2012 meeting minutes this week, revealing a Federal Reserve in the ready in the event additional monetary stimulus is needed.

The Fed Minutes function much like the minutes from a business meeting; or, condominium association meeting, for example. It’s a detailed review of the conversations and debates between FOMC members, and is typically published 3 weeks after a Federal Reserve meeting.

The Fed Minutes is a follow-up statement on the FOMC’s more well-known, post-meeting press release. It’s also much more lengthy.

Those extra words are important, too, because the detail offered within the Fed Minutes lends insight into how our nation’s central bank views the U.S. economy, its strengths and weaknesses, and its threats.

From the Fed Minutes, some of the Fed’s comments includes :

There was also substantial talk about Europe and its role in the U.S. economy. Notably, U.S. financial institutions have been actively reducing their European exposure to contain damage in the event of a full-blown economic crisis abroad.

This has had the net effect of lowering mortgage rates in North Carolina. Mortgage bonds often benefit from economic uncertainty.

In addition, because several Fed members acknowledged a willingness to add new stimulus to the U.S. economy, mortgage markets are accounting for the possibility it could happen. It’s unclear whether stimulus would be added after the Fed’s next meeting, or at some point later in the year, or at all.

Home Buyer Guide - Winter 2021 Are You Thinking About Buying a Home? The process of buying a home can be overwhelming at times, but you don’t need to go through it alone. You may be wondering … END_OF_DOCUMENT_TOKEN_TO_BE_REPLACED

Each year, homeowners planning to make a move are faced with a decision: sell their house during the holidays or wait. And others who have already listed their homes may think about removing their … END_OF_DOCUMENT_TOKEN_TO_BE_REPLACED

Some Highlights While there are many financial perks to owning a home, there are also powerful non-financial benefits to consider if you’re thinking about making a move. Homeownership allows you to … END_OF_DOCUMENT_TOKEN_TO_BE_REPLACED

If you’re thinking about buying a home, you’re likely trying to juggle your needs, current mortgage rates, home prices, your schedule, and more to try to decide if you want to jump into the market. If … END_OF_DOCUMENT_TOKEN_TO_BE_REPLACED