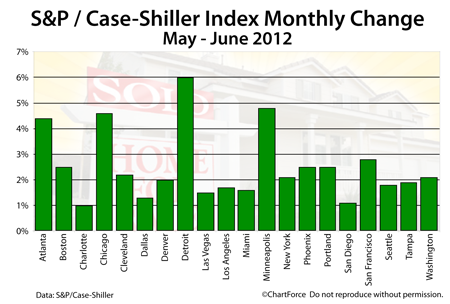 According to the Standard & Poor’s Case-Shiller Index, home prices rose 6.9% between the first and second quarter of 2012, the largest quarter-to-quarter gain since the home-value tracker’s 1987 inception and another signal that the housing market is in recovery.

The private-sector metric’s results are similar to what the government’s Home Price Index showed for June, too — values rising quickly. In addition, for the second straight month, each of the Case-Shiller Index’s 20 tracked markets showed month-to-month improvement.

June would have marked three straight months if not for Detroit’s value-setback in April.

The top performing markets in June, as tracked by the Case-Shiller Index were :

However, it should be noted that the Case-Shiller Index pulls from a limited sample set. It does not include condominiums or multi-unit homes in its findings, nor does it account for new construction. These exclusions make a material impact on the results of both Minneapolis and Chicago, as examples. Both cities feature a large concentration of condos.

Overall, though, the June data looks sound. Said a spokesman for the Case-Shiller Index, “The market may have finally turned around.”

Furthermore, home buyers nationwide can corroborate what the Case-Shiller Index has uncovered. Falling home inventory and rising home demand have helped to move home prices higher in many U.S. markets.

Low mortgage rates make new homes affordable and rising rents are turning the Rent vs Buy equation on its head. In July, according to the National Association of REALTORS®, first-time home buyers accounted for 34% of all home resales.  This trend is expected to continue into 2013.

As compared to one year ago, today’s home buyers have 8% more purchasing power and, with rising home prices, they’re going to need it.

Home Buyer Guide - Winter 2021 Are You Thinking About Buying a Home? The process of buying a home can be overwhelming at times, but you don’t need to go through it alone. You may be wondering … END_OF_DOCUMENT_TOKEN_TO_BE_REPLACED

Rising interest rates have begun to slow an overheated housing market as monthly mortgage payments have risen dramatically since the beginning of the year. This is leaving some people who want to … END_OF_DOCUMENT_TOKEN_TO_BE_REPLACED

Today’s cooling housing market, the rise in mortgage rates, and mounting economic concerns have some people questioning: should I still buy a home this year? While it’s true this year has unique … END_OF_DOCUMENT_TOKEN_TO_BE_REPLACED

Mortgage rates have increased significantly in recent weeks. And that may mean you have questions about what this means for you if you’re planning to buy a home. Here’s some information that can help … END_OF_DOCUMENT_TOKEN_TO_BE_REPLACED